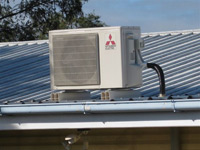 The thing about accidents is that they are generally avoidable. Think about accidents in the home – such as a pot boiling over on the hob, or falling downstairs, fire and flood, broken cups… the list goes on. Most of these types of accidents would never happen if a little extra care were taken.

Fortunately, very few accidents in the home result in disasters, although the majority of disasters begin with an accident.

It’s the same at places of work and play, of course. A slippery shop floor could end with a slight fall, or perhaps a far worse accident. Such an event will often lead to a loss of good faith, or perhaps even a loss of custom because of bad publicity, as well as the likelihood of being sued by the victim.

There is generally no excuse for negligence.

Despite some very high profile cases, commercial air conditioning continues to be the cause of several accidents annually that could easily have been avoided. Poorly installed units and those not regularly serviced by a qualified air conditioning mechanic are the main causes of these accidents.

Fortunately, the injuries sustained by a woman in London in 2008, when struck by a falling air conditioning unit, were not fatal. But severe head, arm and leg injuries did warrant a stay in hospital. All she was doing was waiting for a bus.

However, a pedestrian was killed in 1988 by a long time commercial air conditioning unit when it fell from an office window in New York.

Only last week, a truck cab was crushed when an air conditioning unit fell on it Thankfully, no one was hurt – though this outcome owed everything to luck.

Poorly installed air conditioning units are also to blame for injury and death. In the UK, a metropolitan council was fined £400,000 (around $600,000) when found guilty of negligence after an electrical contractor was killed while examining a faulty commercial air conditioning unit.

Clearly, commercial air conditioning can be dangerous, before, during, and after installation, which is why Brisbane Air recommends using only well qualified air conditioning technicians throughout the process.